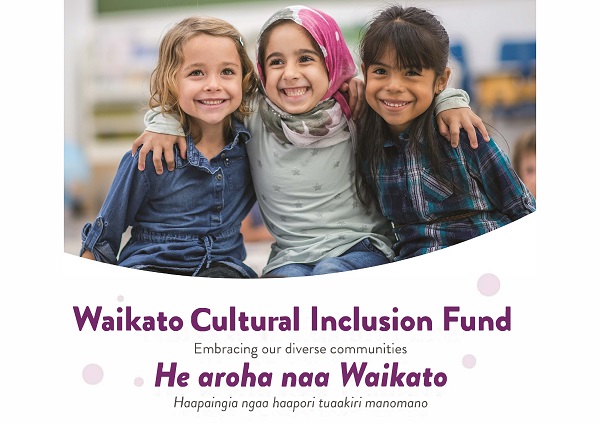 The new Waikato Inclusion Fund, launched by Momentum Waikato Community Foundation in response to the Christchurch terrorist attack on 15 March, has been receiving donations both large and small, from creatives, corporates and concerned citizens.

At one end of the spectrum, SKYCITY Hamilton have donated $10,000. Their General Manager Michelle Baillie says their local business, which employs people from 28 different cultures, is extremely proud to contribute to the Waikato Inclusion Fund.

“SKYCITY Hamilton recognises and encourages the diversity of our workforce, customers and community and is keen to support initiatives like the Waikato Inclusion Fund,” says Michelle.

“As reflected in our recent ‘Deloitte Top 200 Award for Diversity and Inclusion’, SKYCITY are considered a leader in this space in New Zealand and we want to play our part in building a kinder and more inclusive community for everyone; regardless of religion, gender, ethnicity or any other social or personal characteristics. We think the Fund will make a significant difference in our community and we are proud to be able to contribute,”

Equally significant in terms of relative commitment is the contribution made by Benny Marama and his artistic partners.

'Akakite Mai Itaau Tua - Tell Me A Story' is a show written and performed by Benny, with live music composed and conducted by Jeremy Mayall and Taonga Puoro by Horomona Horo. It tells the story of Benny’s parents "as they fall in love, emigrate to Aotearoa, separate and find each other again. Weaving together real life stories with Māori and Polynesian mythology, an aural experience unlike anything heard..." They last performed it at The Meteor a couple of weeks back (pictured above) and donated that show's proceeds, a bit over $1000, to the Waikato Inclusion Fund, because it fits "the kaupapa of what we explored".

“I have donated because I am concerned about what happens after ‘what happens next’,” says Raewyn.

"After all the current compassion and empathy fades away, it is important that we have something in place to support a new way of living together. And I know that Momentum Waikato has the framework to deliver this through this new Waikato Inclusion Fund."

Thanks to Michelle, Benny and Leanne, your support demonstrates Momentum Waikato’s ability and desire to “connect and convene” across our community.

And a huge thank you to everyone who has contributed to for the Waikato Inclusion Fund so far.

The Waikato Inclusion Fund will support projects and programmes that build and celebrate greater understanding and acceptance between and amongst Waikato communities.

Donate to the Waikato Inclusion Fund.